K.A. Lugo is a native Northern Californian who grew up in Carmel-by-the-Sea, part of a larger community founded by artists and writers, including John Steinbeck, George Sterling, and Jack London. Over the years, she's worked with several Carmel notables, but it was in 1997 she left the employ of Clint Eastwood to live in Ireland for six months. It was during this time she met the man she would marry, and relocated to live in Ireland.

While always writing since a very young age, K.A. earned her keep in Ireland as one of the country's foremost travel consultants who also wrote travel articles about Ireland.

Slaughtered is the first in the new highly acclaimed Jack Slaughter Thriller series, set in San Francisco, a city close to K.A.'s heart.

K.A. loves hearing from readers and promises to reply to each message. Please visit her socials to stay up-to-date on this exciting new series. 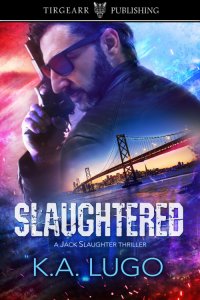